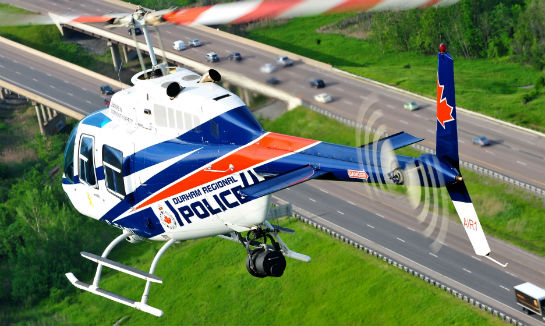 Based out of the Oshawa Municipal Airport, the ASU covers all 2,500 square kilometers of Durham — one of the five jurisdictions of the Greater Toronto Area. Durham Regional Police established the ASU in 1999, becoming the first municipal policing agency in all of Ontario to benefit from helicopter patrol. The unit began operations using a leased JetRanger before purchasing its current Bell 206 JetRanger new from Bell Helicopter. 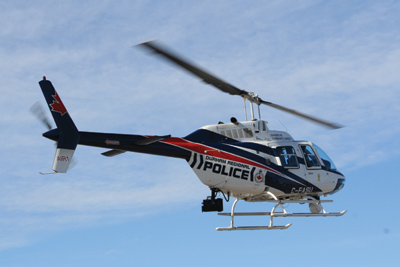 Recently, the ASU upgraded some of the equipment on its JetRanger in order to provide the best possible service.

“We updated our camera system to the brand new, cutting edge MX-10 high definition IR camera,” said Lyndon Greene, detective constable and tactical flight officer in the Durham Regional Police ASU. “We also updated our Churchill Navigation ARS [Augmented Reality System] to the latest and greatest that they offer, so we are cutting edge at this point. Everything is high definition.”

In 2015, the ASU responded to 781 calls for service, assisted in 88 arrests in those calls, was first on scene 402 times, and had 190 locates, which could range from a missing person to a fleeing criminal. “Even if we don’t actually locate the fleeing criminals, having our aircraft orbiting overhead drives the criminals to ground, which slows them down or stops them for a K9 unit locate and arrest,” said Greene.

Greene said that the aircraft and its equipment, especially ARS, has proven itself to be a huge benefit to public safety over the years. “The missing child would stay missing that much longer, the home invaders or any other ‘in progress’ criminals would be well on their way to an escape without an air support unit.”